This page provides general information about Pokémon Sage, and tells you how you can follow along.

Pokémon Sage is a Pokémon fan-game, started on 4chan's /vp/ (Pokémon) board. It began in October 2012 as CAPX, which stands for "Create a PokédeX." At the time, it was simply an attempt to collaboratively design a set of original Pokémon. Not long after, people began mobilizing to create a game around these Pokémon, and thus Pokémon Sage was born. In early 2015, Sage moved off of /vp/ to private development channels and continued working, no longer interacting with the anonymous users of /vp/.

Pokémon Sage's name, in addition to being a green-grey herbal color, refers to the practice of "saging" a thread on 4chan -- respectfully leaving a comment not considered important enough to warrant bumping the thread to the top of the thread feed.

Pokémon Sage takes place in the Urobos region, which draws inspiration from the geography, culture and history of Latin America.

Pokémon Sage is built in RPG Maker XP and uses Pokémon Essentials, a scriptset that aims to port Pokémon's core mechanics to the engine. Pokémon Sage is not a ROM hack and is played on your home computer from a Windows executable file. The game is 2D and sprite-based, taking stylistic inspiration from multiple Pokémon games. All assets created for Pokémon Sage were created specifically for this fan-game. They should not be used in other creative projects without our express permission.

All information contained on this wiki is pre-approved and confirmed by our team. It reflects the current state of development, not what is in the latest playable version of the game. Since this wiki is a repository for several of our development processes, pages should not be edited unless you have first gained permission.

Sage is a self contained experience. It can be fully completed without any external interaction with other games, events or services. All Pokémon, locations and characters are original to this game. Ultimately, the game's aim is to capture the spirit of the games that inspired it, and it should be be a fun and enjoyable experience for players of any experience level.

Mechanically, Sage closely resembles the 5th Generation of Pokémon games with a few twists of our own thrown in. Features and mechanics introduced to the Pokémon series after Pokémon Sage began development will not be included. This includes but is not limited to the Fairy-type, Mega Evolutions, Z Moves, moves, abilities or items.

If you are interested in keeping up with game development there are a couple things you can do. 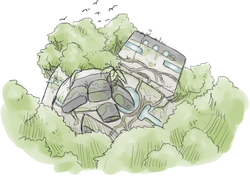 Pokémon Sage has a demo for you to try out! Though it only covers up until the player receives their third badge, it represents a cross-section of our final product. Once you're done, you can help us out directly by taking the feedback and bug report surveys found on the download page. Telling us what we're doing right and what we're doing wrong is easy and helps us create an experience you'll enjoy even more.

Join the discussion on Discord!

Still can't get enough Sage? On our Discord server, you can talk about your experience playing the game and follow along with the development in a different way than you can on this wiki.

Retrieved from "https://capx.fandom.com/wiki/About?oldid=73933"
Community content is available under CC-BY-SA unless otherwise noted.