Andante Bay is a coastal resort town at the easternmost tip of Urobos, and home to the Andante Gym, the third gym of the Urobos League.

The Lighthouse is located atop a peninsula in the southeastern corner of town. The player can complete a short puzzle here to reactivate the light and receive the Good Rod from the Elderly Man at the top.

The Snome Cone Cart is located at the end of the Andante pier. The player can purchase Snome Cones here.

Located roughly in the center of town, this is Professor Northington's home. The player can encounter him here after defeating Cameron.

The Train Station is located in the northwestern part of the town. The player can board a train here to travel to other cities in Urobos.

The Andante Gym is the official Gym of Andante Bay. It is based on Water-type Pokémon. The Gym Leader is Cameron. Trainers that defeat him receive the Depth Badge.

Andante Bay has a population of 35.

The Poké Mart is roughly in the center of town.

Before entering the Gym:

If the player chose Foliat:

If the player chose Kidling:

If the player chose Aguade: 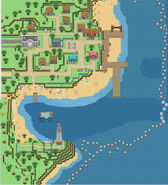 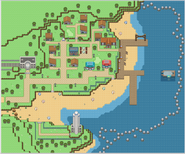 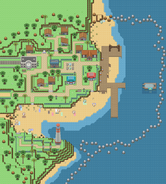